Love in the Time of Ancient Rome: 3 Things You’ll Learn During Your Classical Studies in Rome

Among the many privileges of living in Rome is the opportunity to explore the remnants of the greatest city of the ancient world. At the height of its empire, Rome was likely the largest city on the planet with elaborate architecture, infrastructure, and social systems. It remains a fascinating study destination for majors in Classical Studies because Rome’s rich history perseveres in numerous monuments, museum collections, and archaeological findings.

Students in John Cabot University’s Classical Studies program are ideally situated to complement their education with on-site, first-hand experience of ancient art and material culture in Rome and other parts of Italy. Analyzing the foundations of various aspects of western civilization—such as social customs regarding love and relationships in ancient Rome—can provide insightful context for understanding human relations in our contemporary world and critical thinking skills for addressing future challenges.

Read on to learn more about social customs, love, and marriage in ancient times.

Roman life seemed to center around the city, as Romans were particularly social beings that longed to belong to a civilized community. It was a patriarchal society in the purest sense, where the male head of household (pater familias) held special legal powers over all members of his family, which might include his wife, adult sons and married daughters, various other relatives, and slaves. As the Roman Empire expanded its conquests, slavery was commonplace and social class was hierarchical with strict distinctions in legal rights depending on one’s status.

With such societal constrictions and inequalities, love often took a backseat to economic realities and inter-family relations. Girls stopped receiving formal education at about age eleven and were often arranged in marriage while still in their teens. The more prominent her family, the less likely she would have much choice in her husband—marriages were often arranged to gain political and economic favor between families.

While Roman laws placed many restrictions on who was permitted to marry and required the fathers’ consent, marriage was simply a personal agreement between the bride and groom to live together. At a formal ceremony between the two families, gifts would be exchanged and the bride’s father would arrange a dowry to be given to the groom’s family. 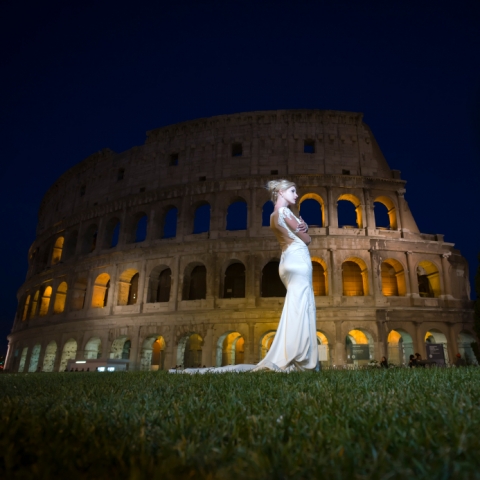 Many of our wedding symbols originated in ancient Rome

If you study classical studies in Rome, you’ll learn that many of our traditional wedding symbols come from ancient Rome. The wedding date would be carefully chosen with June the most favored by the gods for matrimony and on the big day, the groom would lead a procession to the bride’s family home. She would wear an orange-yellow dress and veil, be attended by a bridesmaid, and wear her engagement ring on the same finger we do today. An enormous feast and celebratory march to the couple’s new home would follow the marriage contract’s signing and the groom would carry the bride over the threshold.

Love and Romance in the Time of Ancient Rome

Although marriage wasn’t usually based on romantic attraction, love and affection would often grow over time between husband and wife. Love poetry flourished in ancient Rome but was all written by men and mostly addressed extramarital affairs. In poems from around the first century A.D. that students might analyze during classical studies in Rome, men were so threatened by their feelings of vulnerability that love might be called a plague that caused the poet’s tongue to swell up.

Students in Italy today can find evidence of ancient Rome’s romantic side in archaeology and art throughout the city. The Temple of Roma and Amor, found among many other temples in the Roman forum, was built in the 2nd century A.D. in honor of the goddess of love, Venus, and the goddess Roma.

More recently, the Villa Farnesina was built in the 16th century as a place for banker Agostino Chigi to host extravagant banquets and spend time with his mistress. It remains one of Rome’s most beautiful examples of Renaissance architecture and features marvelous romantic frescoes by Raphael. Apparently, the artistic master was almost too distracted by his own lover to finish his scenes of Venus and Cupid, so Chigi had to allow her to move in with Raphael to get the painting completed.

Have you considered English speaking universities in Italy to pursue a classical studies degree?

« Student Spotlight – Filippo Nicoletti: Thanks to the Summer Camp I Learned to Push Myself Out of My Comfort ZoneBest Chance to Learn about Yourself »