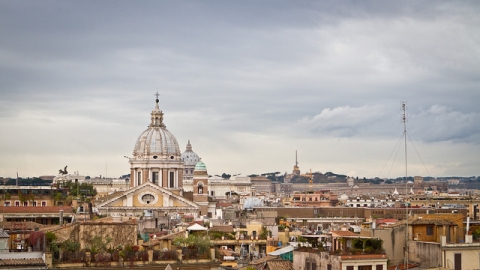 It’s a big year for John Cabot University as it marks the graduation of our largest class ever!

The Villa Aurelia, a beautiful Roman villa overlooking the city’s historic center, hosted the graduation ceremonies on May 12th for the Class of 2014, whose 134 students came to study abroad in Rome from 22 countries throughout the world.

This year’s graduating students have already been accepted to a variety of prestigious graduate schools, including Oxford, Columbia University School of Journalism, Vanderbilt University, Brandeis University and Bocconi University. Other graduates, including many  international students in Italy will be moving across the globe, securing rewarding employment and internships at places such as the Library of Congress in Washington DC and ESource Capital.

Several students look forward to giving back to the international community, volunteering for a variety of international and nongovernmental organizations in the United States and Europe after graduating John Cabot University.

“After my graduation, I would like to take part in volunteer programs. It would be interesting to work for non-profit organizations to help poor children to improve their educational skills,” says graduate Barbara Del Negro.

Graduate Sarah Benqlilou has a different plan. “After I graduate, I want to gain as much experience as I can by interning in different parts of Europe, before going back to Morocco and working in my family business,” she says.

Tariro Mzezewa is graduating with a degree in Political Science and Communications and will be continuing her studies at the Columbia University Graduate School of Journalism, in New York City.

“I began contributing to JCU’s student newspaper, The Matthew as soon as I arrived at JCU. Then during the 2013-2014 academic year, I became editor-in-chief. Under Professor Rosamaria Mancini ’s guidance, I learned about writing, editing, media ethics, leadership, and teamwork – all skills I will take with me into the next phase of my life,” says Mzezewa.

“At JCU I was able to get the attention I needed from professors due to the small classroom setting. I am really passionate about literature, and when the professors understood that, we were able to establish a wonderful connection,” he said in an interview in April.

So congratulations to all of our John Cabot University graduates of the class of 2014 – here’s to your achievements and future successes!