4 Ancient Roman Sites to Visit While You Study Abroad

John Cabot University students have fun posing outside the Colosseum

There are countless ancient sites for students to visit while they study abroad in Italy, fFrom ruins of once-grand markets to aqueducts, catacombs, and temples. Many ancient sites are still standing in the Eternal City – even though some of them are close to two thousand years old!

These incredible historical artefacts offer students a glimpse into the customs, culture and everyday life of ancient Rome. From emperors to gladiators and even shopkeepers, you can explore where they lived, worked, celebrated, and spent their downtime.

So if you’re new to Rome and want a preview of what you might see on class-organized tours – or are excited to plan your own itinerary – read on to find out which ancient sites in Rome are a must-see for visiting students.

The Pantheon: an Architectural Marvel 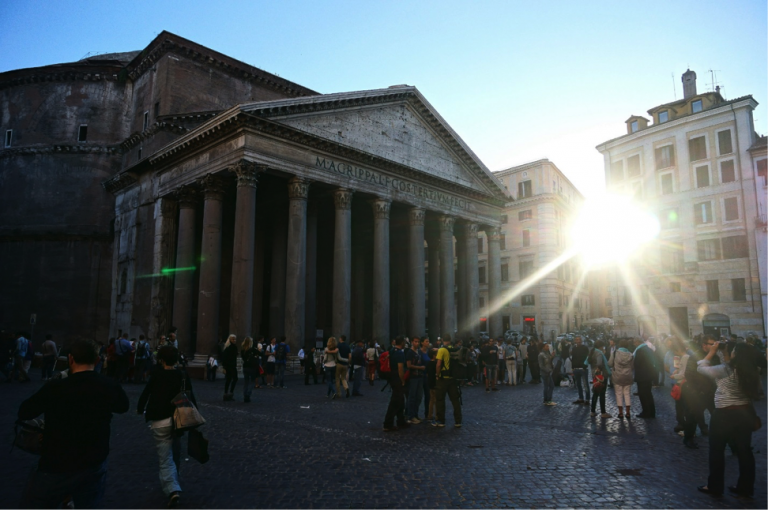 Students visit the Pantheon as they study abroad in Rome

The Pantheon was completed around 125 AD by the emperor Hadrian – the same emperor who built the famous Hadrian’s Wall – and was dedicated to the gods of Ancient Rome. Today, the Pantheon is an incredibly well-preserved monument that students can tour to understand more about ancient Roman religious life.

The Colosseum: “Reality” Entertainment on an Epic Scale!

If you decide to study abroad in Italy, then visiting the Colosseum is a must, no matter what your major is. Commissioned by the famous emperor Vespasian, the Colosseum was built to seat as many as 50,000 people who flocked there to see gladiators fight, wild animal hunts, and the executions of criminals.

The Colosseum was even the site of incredible naval battles known as “naumachia.” These battles were typically re-enactments of previous victories or historical conflicts, with participants numbering in the thousands. Prisoners of war and convicts were rounded up to fill in for the opposition during these epic events, and forced to fight to the death.

Today, students can visit the underground passageways of the Colosseum, which were first opened to the public in 2010.

Palatine Hill: The Home of Rome’s Rich and Famous

The Palatine Hill was one of the prime spots of real estate in the Roman Empire. It was the rumored home of Rome’s founder, Romulus, and the place to live for wealthy leaders and aristocrats.

Today, students can still visit the ruins of the Palatine Hill, which have survived thousands of years. You can see the “stadio” which historians believe was a private stadium for emperors to enjoy exclusive games and entertainment. You can also walk through the former residences of emperors Domitian, Augustus, and Septimius Severus.

There are several malls in Rome where students can go shopping for an afternoon as they study abroad. Many historians believe that world’s oldest shopping mall is actually Trajan’s Market. While this ancient monument is no longer a place to buy goods, you can still visit its well-preserved ruins and catch of glimpse of what daily life would have looked like long ago.

Trajan’s market is believed to have housed over 100 shops that sold both local and imported items like oil, wine, spices, and fresh produce. Historians also think that the market held apartments, as well as administrative offices for the emperor Trajan. Whatever the original buildings held, one thing is certain: it was a hub of activity, and a central part of life in ancient Rome.

What other ancient sites would you love to see as you study in Italy?