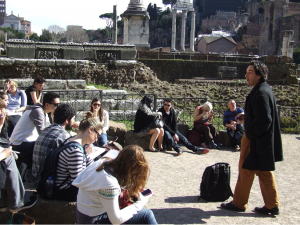 English literature is a challenging area of study that encourages students to develop advanced critical thinking, communication, analysis, and research skills. English lit students go on to apply these skills in a wide range of career paths including journalism, law, teaching, politics, publishing, arts and media, and business.

It’s no surprise that the professional applications of an English Literature degree are so diverse and wide-reaching. Students explore the historical and cultural contexts of each text they study, analyzing themes and connections, and debating those ideas with peers and professors. And at John Cabot University, English lit students examine works from the Anglo-Saxon period (about 410 – 1066), all the way up to the 21st century!

In their journey through time and across genres, students develop high-level insights into the human condition and the evolving character of our society. Read on to discover how studying English literature in Rome further enriches those insights, and what Italy has to offer literary undergrads.

Study in the Birthplace of Modern English Literature

The Italian Renaissance, which took place between the 14th and 16th centuries, was the catalyst for the “rebirth” of fine arts, literature, music, architecture, and more. Europe emerged from the Middle Ages with a renewed appreciation for discovery and invention, and Rome was at the heart of it all. As the Renaissance spread to England, so did a fascination with Italian culture—famously inspiring a new generation of talented writers, including William Shakespeare.

Shakespeare drew inspiration for his characters from historical Roman figures like Julius Caesar. In fact, his plays Titus Andronicus, Julius Caesar, Coriolanus and Antony and Cleopatra are all set in the Eternal City.

While they study Shakespeare and explore the literary implications of the Renaissance, English lit students in Rome will draw inspiration from the city itself, visiting historical sites and retracing the steps of some of literature’s most famous figures.

A Diverse Campus is the Ideal Backdrop for Literary Discussion

Just as the city of Rome adds dimension to the study of English literature, an international campus brings a layer of complexity and insight to textual analysis. At John Cabot University, students come from all over the world, bringing with them diverse cultural perspectives – viewpoints that enrich students’ discussions of books, themes, and real-world connections.

Whether they’re exploring the introduction of the novel or post-modern literary theory, students in Rome benefit from looking at English lit through the eyes of non-English peers, and with a uniquely global frame of reference.

Rome is an International Hub for Writers and Book-lovers

Rome has always served as a hotspot for writers. Throughout history, the Eternal City has attracted well-known literary figures such as Nathaniel Hawthorne, Charles Dickens, and Lord Byron – and was the adopted home of the famous Romantic poet John Keats.

A popular Roman destination for literature lovers is the Keats-Shelley House, where Keats lived out his final days before tragically succumbing to tuberculosis. Students who study English Literature in Rome can visit the Keats-Shelley House (also a museum) to view original manuscripts from Keats, Shelley, and their Romantic contemporaries, Lord Byron and William Wordsworth.

Luckily for book-lovers, there is also an abundance of annual literary events to take part in while studying in Rome. Every year, the city hosts the Rome International Literature Festival (also known as Letterature), which brings together both up-and-coming and veteran writers to give readings and seminars. If you can’t make it to Letterature, there’s always the “More Books, More Freedom” Book Fair in December, which draws together thousands of literature fans to check out the newest releases from international and independent publishers.

These events are a great way for students who study abroad in Italy to get involved in Rome’s local literary community, see some of their favorite authors, and discover new writers!

Which English literature courses are you most excited to explore when you study abroad in Rome?