3 Roman Pasta Dishes You Must Try

When most people think about Italian food, they think of two things: pizza and pasta. What they may not realize is how many different types of these masterpieces there actually are. Depending on the region of Italy you find yourself in, the sauces and even the pasta itself can vary drastically from city to city. Each recipe is based on local traditions and available fresh ingredients in the region.

For any JCU students who are looking to explore Italy through its cuisine, you should start with the obvious: Rome.

Rome is home to many local specialties. Three of the city’s most delicious and classic pasta dishes are bucatini all’amatriciana, spaghetti alla carbonara, and cacio e pepe. 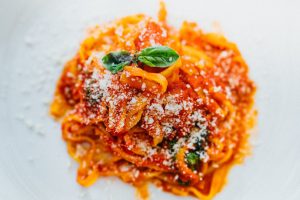 The red sauce that comes on a steaming plate of bucatini all’amatriciana might initially be mistaken as a plain old tomato sauce. Although the famous pasta dish might not require a long list of ingredients, if made properly, this simple recipe will taste complex and absolutely delicious. Amatriciana originates from the town of Amatrice in Lazio, dating back to the 18th century. The first written record of pasta with tomato sauce has been found in a cookbook from 1790. It became increasingly famous in Rome over the 19th and 20th centuries and was quickly considered to be a “classic” of Roman cuisine.

In order to make authentic amatriciana sauce you need tomatoes, guanciale, pecorino romano cheese, and olive oil. Guanciale–often confused with pancetta–is cured pork cheek and it is one of the most important aspects of a good amatriciana, as it really gives the sauce its texture and flavor. Once the tomato and guanciale sauce is made, it is stirred into some bucatini pasta — al dente, of course. Also, you may be tempted to sprinkle fresh parmigiano on top of any hot Italian pasta dish, but if you really want to keep your amatriciana traditionally Roman, you will grate some fresh pecorino romano on top instead! 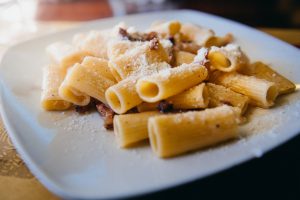 Carbonara is another famous Roman pasta dish; however, this recipe comes with a bit of controversy. While many claim to make “real” carbonara with milk or cream, in reality, if you are eating traditional Roman carbonara, you won’t taste any added cream or milk. This pasta dish is unrecorded before World War II, and it was first described in an Italian newspaper in 1950. It was described as a Roman dish during a time when many Italians were eating eggs and bacon supplied by troops during the war.

Spaghetti alla carbonara is a little tricky to make, although it requires very few ingredients. All you need is guanciale (or pancetta), eggs, pecorino cheese, and black pepper. However, mixing the raw egg must be done away from the direct heat in order to avoid curdling the egg. The mixture of the egg, cheese, and fried guanciale will create a creamy sauce, which perfectly coats the freshly cooked spaghetti.

You really can’t get more Roman than some classic cacio e pepe. Its name literally translates to “cheese and pepper” in several central Italian dialects. And the traditional recipe requires just that: cheese and pepper; more specifically, pecorino romano cheese and black pepper. Although this may sound too simple to be delicious, the truth is that the perfect amounts and high quality of the pecorino and black pepper will create a taste you didn’t know could come from something so simple!

This dish is one of the most ancient recipes of Italian cuisine. Legend says the origin of this pasta dates back to the Roman Empire, and for centuries cacio e pepe has been the go-to meal for Roman shepherds. The few ingredients are easy to carry, and despite what many think, this delicious pasta does not require any added oil, cream, or butter. The secret to preparing cacio e pepe is to use some of the hot cooking water left from the pasta. The heat of the water will melt the cheese, and the starches in the water will help bind the pepper and cheese to the pasta.

Read more about Italian cuisine and eating in Rome on a budget. 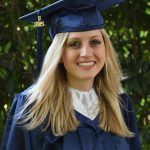 Alexa Vujaklija (Shearer)
Class of 2015
Communications major
Grew up in the United States, Germany, the Republic of Georgia, Russia, and Bulgaria