My First Trip to Rome 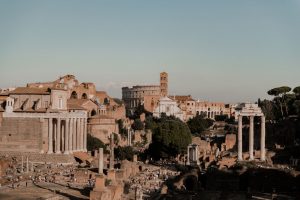 I can still remember my first trip to Rome, over ten years ago.  I was an excited middle schooler visiting my grandparents in the United States for Christmas, and on our way back home to Moscow after the holidays, my dad surprised us with a two-day layover in Rome. It was my thirteenth birthday.

I distinctly recall the first sight that caught my eye in the city. It wasn’t the Trevi Fountain or the Colosseum, but a spot that often gets overlooked; a place that people sometimes forget to add to their list of Rome’s must-see gems. Leaving our beautiful hotel behind us, we stepped out into our neighborhood between the Aventine and Palatine Hills, and that’s when I saw it: the Circo Massimo, or the Circus Maximus.

I’m sure to some it may just look like a big field, a running track, or an overgrown park, but to me it represented so much more. It was my first taste of ancient Rome, and today it symbolizes my first impression of a city that would become my home many years later. I looked out onto the grassy hills and stood in awe of the ruins that remain to this day. I had spent years watching movies, reading textbooks, and learning about the history of the Roman Empire, but no lecture in a classroom would compare to this, the real thing. “I’m really in Rome,” I thought to myself and I could almost see and hear the chariots racing by. 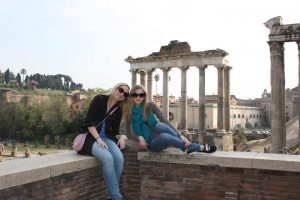 Our next stop was one a little higher up in the guidebooks: the Roman Forum, epicenter of the Roman Empire. As we walked through the ruins of what once were important government buildings, residences, marketplaces, and other structures, I was overcome with peace, inspiration, and curiosity. I had never felt this sort of connection before to antiquity, or to a settlement and empire that had ruled, thrived, and fallen centuries ago. I walked in the footsteps of gladiators, emperors, and statesmen, and little did I know that one day I’d be back, walking in my own footsteps as a college student at John Cabot University, and that this ancient city would become “my” city.

At this point, a future beyond middle school or high school hadn’t even crossed my mind – much less college applications – but there was no doubt that I felt a connection to the city. Over the years I had great opportunities to come back to Rome on several occasions. Once, after spending the summer in Naples where–along with a group from my church–I helped run a summer camp for underprivileged youth. Another time I took a road trip throughout Italy with my best friend and her dad during a high school spring break.

Finally, I came to Rome to spend the week with my sister while she was studying at John Cabot. She showed me all the best spots. We had lunch together in the Tiber Café, spent the evenings strolling around Trastevere, and she even suggested I hang out in the Lemon Tree Courtyard while I waited for her to get out of class. This was my first time ever on a college campus, and the combination of the university lifestyle and a city that had caught my eye so many years before was wonderful. I was hooked. I knew exactly where I would be applying when college application season rolled around. I couldn’t wait to be a JCU Gladiator.

Alexa Vujaklija (Shearer)
Class of 2015
Communications major
Grew up in the United States, Germany, the Republic of Georgia, Russia, and Bulgaria

« Beyond Trastevere: Monteverde7 Facts You Should Know About Gianicolo Hill »